Within just a few hours, both the intercomprehension method and the app EuroComDidact ToGO will allow you to develop reading skills in languages of a family of which you already master one. So it is easy to learn Italian or Spanish based on French skills, endorsed by English competence. You then decide for yourself whether you leave it to reading or whether you want to acquire speaking or writing too. In this case, the intercomprehensive approach is a first and powerful step as well. You can find out how it works under the tabs Learning and Intercomprehension didactics. The App EuroComDidact ToGo leaves it to you to decide whether your learning objective targets one Romance language or plurilingual reading skills.

The term Intercomprehension means the ability to understand a foreign language without having formally learned it through teaching or acquired it in its natural environment. The method activates your already existing relevant language and language learning knowledge in order to link it with new knowledge to develop new skills. The intercomprehension approach is the King’s Way to develop language learning skills.

As intercomprehension always starts with words’ recognition, knowing and identifying words is crucial for understanding languages. The app EuroCom ToGo will help you to learn the vocabulary you need to develop fundamental and encompassing reading skills. The method is simple. You just compare the target word to its equivalents in other Romance languages and English and German as well. At a glance, you will find what the words have in common in terms of form, meaning and use, and what is different. If you know French, don’t hesitate to see this video.

Under the name ‘EuroCom’, linguists of Romance (EuroComRom/EuroComDidact), Germanic (EuroComGerm) and Slavic languages joined forces to promote eurocomprehension. The term means understanding European languages beyond the boundaries of only one of them. 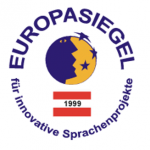 In 1999, the group was awarded the Austrian “European Seal of Approval for Innovative Language Projects”. The EuroCom-group was a partner in several intercomprehension focused projects supported by the European Union. (See European Observatory for Plurilingualism). The intercomprehension method has received numerous awards.

Are you interested in learning more about EuroComDidact ToGo?